With the advance of industrialisation and the new, unfamiliar pressures of city life, it was almost natural, that a movement arose, that wanted to re-focus on a more natural way of life. This reform movement of the late 19th century, during which the gymnastic clubs and walking motion developed, is associated with names as Kneipp, Jahn, Diefenbach and others. 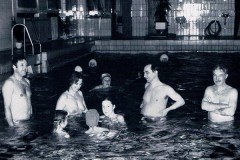 Today it is difficult to understand with what kind of resentment and hostility our fellow friends of this time had to fight to move without clothes. The miners in the Rhein- and Ruhr-area were a strong pillar of the free body culture. They wanted to bath in the fresh air and in the sun after a hard and joyless day of working underground.

If you read the records from our beginnings, the joy of naked bathing in nature seems to have been a constant battle against ignorance and jealousy.

From today’s point of view, you can only respect the sacrifice, the will and the mental and physical strength, with which the pioneers of Essen, Mülheim, Düsseldorf and Duisburg persued their goals.

The first association of naturist friends from the Duisburg area was already established in 1929. 16 male and female friends founded the “Liga der freien Lebensgestaltung”.

Due to the high demand for gravel for the new railway station a beautiful new lake area emerged from the largest forest area in the south of our city Duisburg. It began in 1912 with the Masuren-lake and the Wambach-lake and ended in 2001 with the 6th lake called the Haubach-lake only about 200 m from our premises. This is why the area is now known as the “Sechs-Seen-Platte” (six-lakes-area).

Highlights of the LBN